Our team members are all maritime professionals with experience in training advanced and novice crew. So you’ll likely have one or two seasoned captains aboard! Teresa or Ben will be leading the expedition along with one of our team listed below. We have sailed a combined 140,000 nautical miles on over 50 different vessels ranging from 16′ to 530′, sail and power. We’ve delivered boats to and from the Caribbean, been across the Atlantic, circumnavigated Newfoundland and lived aboard during chilly New England winters. We all have worked on sail training vessels in positions from dishwasher or deckhand to mate, engineer, chief medical officer or captain. Oh, and don’t forget the tugboats, a lobster boat, and primitive row/sail boats too!

We are committed to delivering a safe, fun, and educational passage. Below is our roster of current instructors. The co-instructor for your course is based on availability.

We’re not just sailors trying to make a living doing what we love,
we are educators who love to sail. 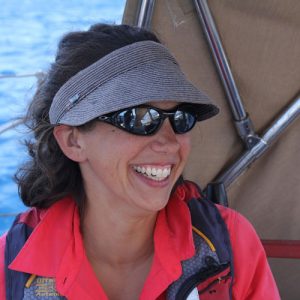 Teresa is a US Coast Guard licensed master and sailing educator with thousands of sea miles and two decades under her belt. She began sailing on the Great Lakes and has sailed the Pacific Northwest, Caribbean, and the Western Atlantic from Panama to Newfoundland. She worked for the Outward Bound sea program, where she taught seamanship and leadership to teens and adults aboard traditional vessels. Teresa has sailed schooners, sailing yachts, mega yachts, dinghies, and even a lobster boat. She has sailed offshore and coastal, both solo and with a crew. Teresa moved aboard a small sailboat in 2008 and sailed solo between Maine and the Bahamas for a few years. Teresa has spoken about leadership and sailing at national events, boat shows, Cruiser’s University, and other functions. She was the producer for One Simple QUESTion, a sailing documentary. She was the director for Hello Ocean, providing research expeditions for early career scientists and artists. During the ‘off season’ she is a science journalist.

Ben holds a USCG 200 ton Master and 500 ton Mate of Towing.  He grew up on Long Island Sound and was drawn to the water at an early age, when he started clamming commercially. Ben has spent the last 25 years working aboard a wide variety of vessels from schooners and tall ships to tugboats and dinghies. He bought his first sailboat, Chamois, a Nor’sea 27 in 2006. A few years later he listed Chamois for sale, and met Teresa when she inquired about buying it!  She didn’t buy his boat, but she did “buy the farm” 🙂 Ben then moved up to Elizabeth, a 28′ Bristol Channel Cutter, which was the boat on which he and Teresa sailed to Newfoundland and made the film One Simple Question. Since then he has crossed the Atlantic, delivered vessels to and from the Caribbean, and worked aboard tugboats. His passion for sailing and good seamanship led him to co-found Morse Alpha Expeditions, and the purchase of Rocinante. He loves sharing his passion and experience, and he also loves baking cookies! 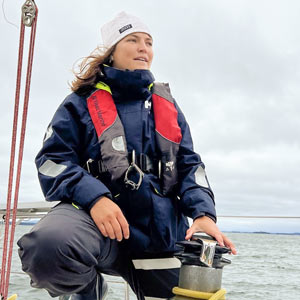 Courtney Boucher is an enthusiastic sailor. Having grown up in Annapolis MD, she’s been around the water since day one. She’s gone on to sail schooners, pulling boats and, of course, yachts. She raced to Bermuda, sailed the Caribbean on tall ships, and knows the Chesapeake Bay like the back of her hand. She currently splits her time working for S.E.A. – Sea Education Association, sailing aboard the 134′ Brigantine Corwith Cramer, and leading expeditions with Outward Bound here on the Maine Coast and in the Florida Keys. She’s an educator through and through, and enjoys the process of watching her students grow as sailors and as leaders. 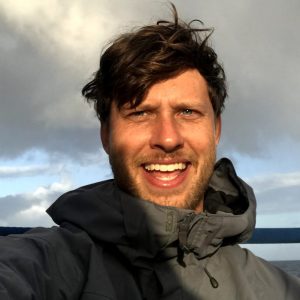 Adam learned to sail by racing dinghies and keelboats on the lakes of Oklahoma. His introduction to cruising and passage-making began in Chicago on Lake Michigan and included sail training on a Morse Alpha Expedition!  Adam is a board member, operations lead, and marketing director for Sail Chicago, one of the country’s largest all-volunteer nonprofit sailing organizations. Sail Chicago coordinates more than 50 volunteer instructors, 300 members and a fleet of 14 boats to introduce more than 150 new students to sailing each year. In 2017/2018, Adam and his wife, Lauren, cruised throughout the US and Caribbean on a 5,000 mile, eight month adventure aboard their Wauquiez Pretorien 35, Jura. Professionally, Adam is a cinematographer and the cofounder of Hardpin Media, which produces short and feature length online films, documentaries and commercials for progressive organizations and politicians. 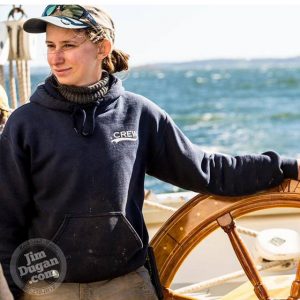 Nicki is a US Coast Guard licensed master and Wilderness EMT with years of sailing experience. Having sailed both coastal and offshore waters, Nicki began her sailing career on the rocky coast of Maine and has since sailed in areas as far west as Puget Sound in Washington state, and as far south as Cuba on vessels from 30 feet to 140 feet long. In addition to sailing, she previously worked at the Philadelphia Wooden Boat Factory teaching both sailmaking and boat building. She currently works for Outward Bound Schools teaching leadership skills through sailing, backpacking and canoeing and assists in instructing EMT courses in Philadelphia. 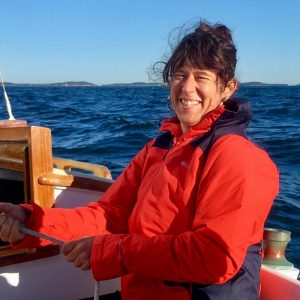 Angela is a licensed captain with the US Coast Guard and former EMT.  She stepped onboard a schooner in New Jersey in 2008 and just kept sailing!  She has had the pleasure of working on the Great Lakes, Southeast Alaska, and up and down the Eastern Seaboard as far south as Trinidad.  After teaching several semester at sea programs, she settled into the midcoast and led various expeditions along the rocky coast of Maine.  She currently works with the Sail, Power and Steam Museum in Rockland during the summers as a sail instructor for youth sailing camps, charters, and private lessons.  She loves the ocean, and also loves growing flowers and raising chickens at her home in Rockland.

Growing up in Maine, Beta has spent her life on the ocean, sailing around coastal Maine with her family, including Casco Bay, mid-coast Maine, and Cape Porpoise. She participated in youth sailing programs, ultimately, drawing her to Tabor Academy, in Marion, Massachusetts for high school. While at Tabor, Beta became a crew member on the Tabor Boy, a 93’ Dutch pilot schooner, participating in research excursions to the US Virgin Islands and British Virgin Islands and part of the crew on a delivery from St. Thomas, USVI back to Marion.

Beta attended Colby College and spent a semester sailing on the SSV Corwith Cramer, a 134’ brigantine outfitted for oceanographic research with the Sea Education Association. On board, she sailed 3000 miles around the Caribbean, and delivered the ship from Key West to Charleston, SC. Beta earned her Level 2 US Sailing Instructor Certification and began working for Sail Caribbean, captaining 52’ sloops and 45’ catamarans. Over six summers, Beta served as Program Director and Captain, teaching students aged 10-18 during 2-3 week programs.

Beta currently works as the Director of Student Support at One Schoolhouse, residing in Portland, Maine. She has taught various science courses, including biology and oceanography, as well as serving as an assistant principal at three different independent schools. Beta holds a Master’s of Education in School Leadership from the University of Pennsylvania.

Working as a Hurricane Island Outward Bound School instructor and shuffling sailboats down the east coast has fueled my obsession with sailing. Since I watched Captain Ron and watched Kurt Russell take on the seas, I felt the pull to be with the Ocean. Growing up as a landlocked child, I knew finding my way to be on sailboats would come from work opportunities. I discovered my first sailing gig through a craigslist post to race with two English gentlemen. We raced up and down the Wilmington River in Georgia and WON in our division. It was everything I ever wanted, and I was once again hooked with untamed enthusiasm. Today, you can find me still following that adventure, leading expeditions with multiple Outward Bound schools.

Seeking a different balance in my time away from the ocean, I can frequently be found covered in metal dust, working at Toole Sculpture Works creating life size metal art installations. Here I can bring my learnings from the dynamic sea into my sculptures and find ways to blend my desire to adventure with urges of creativity.